So I am gradually getting used to Scilab. The documentation for Scilab is a bit scarce. The first link that I use as reference is the Scilab online help:
https://help.scilab.org/docs/6.0.1/en_US/index.html

Another link that's good for getting started with controls in Scilab is:
https://en.wikibooks.org/wiki/Control_Systems/Open_source_tools/Scilab

Anyway, to get started, I chose a problem that I spent a good amount of time during my PhD - control of a UPS. Typically, a UPS can be controlled with PI controllers in the synchronous reference frame, a topic that I have covered in a tutorial:
http://pythonpowerelectronics.com/contents/tutorials/tutorial7/post.html

Using multi-variable control has some significant advantages - you do not need to design multiple nested loops ensuring that the inner loop is super fast and the outer loop is reasonably fast. Here, there is a single loop. To begin with, a system, in the case, a single-phase UPS, which is an H-bridge inverter with an LC filter at the output, has to be represented in the state space form:

Here, x is the state vector. y is the output. And u is the input. There is a very detailed theory behind state space analysis, and I would encourage you to read, if you need to know more. But, for this post, the state variables are those variables that have dynamics - inductor current and capacitor voltage. So,

This is the code snippet for the entire LQR design:


To achieve a 120V RMS voltage output, I have chosen a 300V dc voltage bus (which is a bit of an overkill, but more on that later), a 1milli Henry inductor and a 200 micro Farad capacitor. I have written the dynamical equations at the top as comments and these can be expressed as state space equations with A, B, C, D matrices below that. I will be implementing the state feedback in discrete time and the sampling rate is 20 microseconds.

Again, control theory. Without getting into details, the matrix B, AB, A^2B, .... define the space of vectors that can be achieved with a finite input. So, for a system with 2 states, B and AB, will map a state space. What this means is that the 2 vectors that are B and AB, will be like the x-axis and y-axis of this new space. In the 2 dimensional space, the x-axis and y-axis can be used to express any vector in 2 dimensions. And when any 2 vectors can be used to express any other vector in a 2 dimensional space, the 2 vectors are said to span the space. And if x-axis (1, 0) and y-axis (0,1) are put together as a matrix:
[0 1,
1 0]

With all "a"s not being zero. If such a relation cannot be expressed, the vectors are linearly independent. Anyway, coming back to the matrix [B AB]. If this matrix has dimension 2 for our system of 2 state variables, the system is fully controllable. And if you try to execute the variable "controllability", you will find the rank is 2. Which means our UPS is fully controllable. And that is good news.

So, this means that there exists a feedback matrix K, which can be designed in various ways one of which is Linear Quadratic Regulator (LQR), such that the closed loop system:

Will be asymptotically stable. This means, when influenced by a disturbance, the system will return to a finite region around the reference (xref). And that is what we want.

The next part is to define the linear system for which I use the command syslin. This is a command for defining everything - state space representations, transfer functions etc. After that I define a matrix Q and a scalar (actually another matrix but since we have only one input, a scalar) R. These are for the function LQR. To obtain the state feedback matrix K from LQR, you need to solve the algebraic Riccatti equation. This equations takes inputs Q which are the weights giving to the state variables and R is the penalty on the control signal. Notice how I have given a much higher weight to the capacitor voltage vf (1) than the inductor current (if) as it is the capacitor voltage that we want to regulate. The penalty on the control R is 0.01 which is a number I chose by trial and error and I would recommend that you fiddle with Q and R too.

The result is the K matrix. The rest of the file I will talk about in a later blog post as that is a low pass filter I was trying to add after the controller but didn't work.

I take this K matrix and insert it into my simulator control code as: 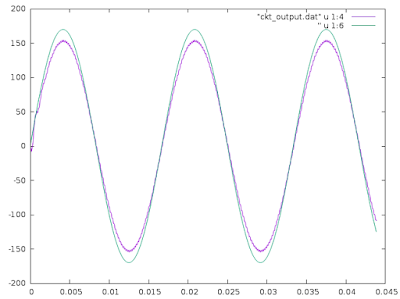 This the result. The light blue line is the reference and the purple line is the actual voltage. To begin with, it doesn't track - there is a steady state error. I will address this in detail in a future blog. However, for now it is to do with the reference xref = [ifref vfref]. The reference for the voltage is easy, because we want to regulate it. But the reference for the inductor current is a bit tricky and for now I have assumed it to be the same as the output load current. Hence, the approximation. But, there is something very special with state feedback. Notice how quickly, the tracking begins - almost immediate. With PI control it would take several cycles to get even close. Also, there is no conversion from stationary reference frame to synchronous reference frame. So this is a great way to produce voltages that have harmonics. Check out the next plot. 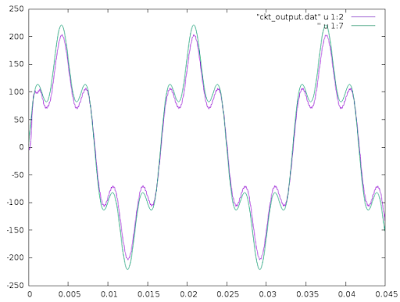 To generate harmonic voltages with the regular method, you would need several reference frame transformations. Here, everything is instantaneous.

There are a couple of problems - the steady state error is the biggest glaring problem. Besides, a few others like a bit more ripple than expected. This topic is by no means over and there will be more blog posts to come.

Stay tuned for updates. I'll be back!

Posted by Circuit Breaker at 12:46 PM